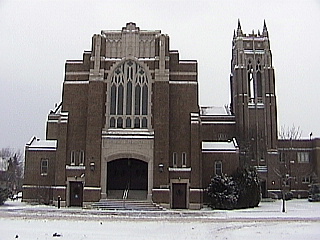 The earliest records state that on August 21, 1887, there was a meeting held at Trondhjem House, which was located on Fourth and Ogden in Superior.  With the help of Reverend Wangness from Minneapolis, the foundation of Concordia Lutheran Church was laid with the establishment of "Vor Frelsers Skandinavisk Lutherske Menighed i West Superior." Lars Shaker, O.C. Nubson and Iver Anderson were elected the first Board of Trustees.

In the summer of 1889, construction began on the former church building.  The pioneers' dream became a reality on July 5, 1891, when the building was complete and the first church was dedicated.  By 1912, when Concordia celebrated its Silver Jubilee, the church membership tripled to 900 souls. During those six years, Pastor Lockrem baptized 500, confirmed 255, conducted 195 funeral services, and tied 182 nuptial knots, "for better or for worse."  The original church building served the congregation until 1929 when it was razed to prepare for the present church's construction.  On Sunday, November 17, 1929, the cornerstone was laid on the building that serves the congregation to this day. The name of the congregation was officially changed from "Norwegian-Danish Evangelical Lutheran Church" to "Concordia Norwegian Lutheran Church" in January of 1930.

Because of the growth of the congregation under Pastor Lockrem, the members determined to reach out to other areas in the city. A mission in the North End on North Fifth Street was continued until May, 1925, when transportation was available to bring them to Concordia.  By 1930 there were 112 students enrolled in the Sunday School.  The East End Chapel was closed in 1957 and the teachers and students in the East End then commuted to Concordia for Sunday School.

Some highlights from Concordia's history: